This is an article that I sent in and got published on the newspaper 1 year back then.

Decided to write it in english and edit some parts 😛

If anyone ask you what home is, how will you answer them?

I was very curious at what answers I would get from the people around me and thus I went to ask some friends. To everyone, this word “home” have many meanings behind it, and of course, my friends felt the same way.

Some friends say that home is a place whereby when they are tired after a long day, they could go back and have a good rest. To some friends, they felt that home is when the people whom you love are together with you and for me, I feel that to me, home is a safe haven.

When I was young, if anything unhappy happened, the first place I will run back to and to complain, was home. I remembered a fieldtrip where I had to go overseas with my friends and teachers, within a few days, the place I missed the most was still home.

When I was still not sensible, I neglected alot of things in my life. The past me wouldn’t have noticed these small little things or details. When I grew up, I understood many things and felt even more conscious to the things happening around me. I felt so grateful that I could own a wonderful home like this.

And this cuteness of the home came from the people I love, acting like guardian angels around me. Whenever I faced some obstacles in life or did something wrong in my life, the only people who did not give up on me was my family.

Writing this, it is not just only to show my gratitude to my family, I also wish that anyone who read this, please do not ever neglect your family who is always there for you.

A home to me, is not a house. Where my family is, there lies my heart and soul, and that’s where home is.

Home is indeed a safe haven..

Sorry been awhile for a long time. Was pretty busy to update anything.

Today I had the most wonderful experience ever. I went to participate this event with my sister.

Yes, So it was a Sg challenge whereby we were supposed to fold 50000 hearts in one hour time and 500 kg of rice would be donated to the needy. And the most coincidence thing was that I met Zoe at the event! She’s a friend that I have met in one of the volunteering experience I had in the past and I was like omg. ahahha. 🙂 It was great to see her anyway!

Anyway it was a super good experience. Here’s some photos to share with all of you!

Anyway, I went to meet my buddy, Jenny on Monday! Remember her?

She’s my buddy for the ILP Program.

Had a really good talk with her and I think I will never ever forget what she say that day.

It was this process.

Listen to what other people have to say, show empathy and then put yourself in their shoes.

Always show kindness to people around you even if they don’t.

Also, on wednesday, went to an event done by my friends.

It’s known as G(art)itude and its something like art therapy. 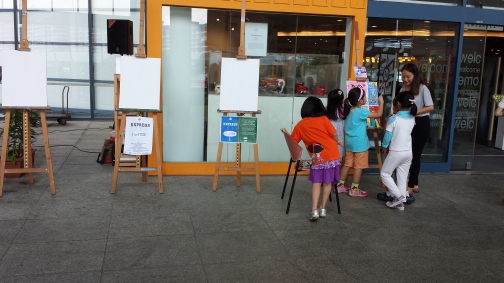 You are supposed to draw things that you are thankful about.

Here’s what my friends and I did. :p

Everyone, have a great week ahead okay!!

Today I want to share a story with all of you.

It will not be an inspiring quotes day but is a story to remember. At least for myself 😉

Had a really bad and tiring day today.

Was feeling pretty moody today but I wouldn’t share the details why. 😛 and plus, I was tired, my cranky mood was switched on.

Anyway, I was on my way home with my besteh, F. We were queueing at the usual long bus queue.

Then we spotted one girl who was standing at the side of the bus interchange, she looked really pale and F saw her bang into the wall. Although there were people standing near that girl and there were quite a number of people who saw happened, no one stood out and in the end, we decided to offer our help.

I went over and consecutively asked if she was okay. But yet, there was no response. She looked so terrible that she was about to faint anytime. We got her to squat down and that was when F and I passed her a bottle of medical oil and plastic bag. Took awhile for her to regain her consciousness, and that was when she said she wanted to vomit. In the end, we walked with her to the toilet that was located super far away. F also helped her apply medicated oil 😀

F and I decided to be a good person till the very end, helped her as much as we could, we decided to send her home. We took a taxi in the end, and sent her back home. During the trip, F and that girl could break fast already! I provided sweets for them and was so glad that I had my first aid kit and sweets in my bag. When the taxi driver heard, he was like , ” Your parents open provision shop? That’s why you have so many sweets in your bag.”

I was so surprised at the taxi driver’s joke. But I did offer him as well. When he continued the conversation, I was a little taken aback. He asked if we were still schooling or working. When he heard that we are still students, he  said that we were so rich that we can afford to take taxi back home. He continued saying that tomorrow we could be eating only white bread and drink water after this taxi treat today.

I did not want to say anything infront of the girl because she might feel even more guilty for letting us fetch her home. When we finally reached the girl’s house, her mother came and thanked us profusely. She offered to pay for the taxi fare which we declined many times, but in the end, she insisted.

When we continued our trip back, we slowly explained the whole matter to the taxi driver and he was surprised about our actions despite not being related to the girl. In the end, we chatted with him for the whole trip back and he kept praising us for being so kind. As we talked to him, I somehow had this thought that it would be such a great thing if everyone was so nice and friendly. HAHA. When we finally reached our destination, he said some things that I think I will never ever be able to forget.

“Girls, well done and good job today. For your kind deed today, I have decided to minus $2 off your taxi bills. You see, actually the bill is $29.50 but yes, $27 will do. I wanted to get you two ice cream but I can’t stop here so that $2, you can go get yourself ice cream to reward yourself! Keep up the good job and all the best.”

Such a cute and nice uncle. We didn’t want to let him deduct that $2 but he still did it anyway. Thank you so much, uncle. So everyone was happy in the end :’)

Although it has been a bad day today, I’m glad something in the evening managed to brighten up my night. :’)

F, we wouldn’t forget today, will we?

Remember how we always say we want to help people as much as we can?

We took our little one step tonight. :’)

“No act of kindness, no matter how small, is ever wasted.”
― Aesop

Have you ever wondered what words are for?

They could be used to convey messages.

They could be used to express people’s feelings.

They could be used to communicate.

But what are words, if one really don’t mean them?

I used to think that words are such a amazing tools.

They can inspire people, but yet they can hurt one too.

But what are words, really for?

I guess each of us have a different answer. Everyone have different meanings behind their words.

For me, I like to use words to inspire people around me, cheer people up when they are sad, and through words, I hope I can make a difference in their lives. Also, hopefully, they can see the sincerity behind my words. 🙂 Another thing is that words allow me to blog. Without words, I can’t even have a blog to express my thoughts. Bloggers, I guess you feel the same way, don’t you? 😀

Anyway, I found a song just nice for today’s topic- What are words.

“I loved words. I love to sing them and speak them and even row. I must admit, I have fallen into the joy of writing them.”

And yes, thank you for 103 subscribers. :’) I have reached my new year resolution this year!

“We all live with the objective of being happy; our lives are all different and yet the same.”
― Anne Frank

Have a good day, everyone! 🙂

Really love this alot and thus, sharing it with all of you.

Today is the 100th day that Uncle Cheng has left us but I honestly believe that he is doing well in heaven. :’)

We miss you, Uncle Cheng.

Those we love don’t go away, they walk beside us every day.
Unseen, unheard, but always near; still loved, still missed and very dear.
– Anonymous