Fireworks shooting up the sky,
bringing us to a brand new light.
Happiness that we felt,
Laughter that we had,
Tears that we wept,
will be gone in a few seconds.
In this year,
A brand new year.
We can only pray for another beautiful process,
and wishes everybody success.
Let the past go past,
and let those beautiful moments and memories last.
Those mistakes we’ve made,
there is nothing left to be said.
Let them be the lessons learnt,
and no longer let the mistakes burnt.
Time passes fast,
and that is why we have to appreciate it well,
so we will all have stories we want to tell. 🙂

Goodbye 2012!! Although I had some small little obstacles in life, but I’m thankful to be in this world! and thankful for all that I have and happened to me 🙂

I wish all of you have a blessed, happy and successful year this year! 🙂
May all your dreams come true!!

My 2013 New year Resolution:
To be a even better person!

“Hope
Smiles from the threshold of the year to come,
Whispering ‘it will be happier’…”
― Alfred Tennyson

Remember when I actually said,

Never ever give up.

I have a real life experience now.
And let me share my story. 🙂
This could be small little details in life , however I guess is still brings out how perseverance can actually bring you somewhere in further to your own goals.

I started baking when I was 14.
I haven’t had anyone to teach me when I started.
I tried multiple attempts and of course, I failed many times.
Despite following some of the instructions, I just seemed to miss out a step or so.
However, that day, I tried again after a long period of time and I decided to follow the new set of recipe again.
The smell was fantastic when I started baking. However, as a few minutes passed, I noticed my first set of cookies failed again. It overbaked and it turned black 😥
I was demoralised! I thought by following the recipe, I could do it well but apparently, I didn’t.
Then, I decided to keep trying, deciding not to follow the recipe anymore and doing it my way. I tried a temperature and changed it during the baking process. Then, I was so glad when I first smelled the aroma. :’)
I went to check and I was so glad it turned out nice and yummy! I then followed the same method for the rest of the cookies and I was so happy.
I’m thankful that I kept trying until I got this end result and I didn’t give up.

Now, I truly believe that failed attempts make you grow and that perserverance brings you success. Not that I don’t believe in the past, but I just felt that feeling more true and realistic. :’) 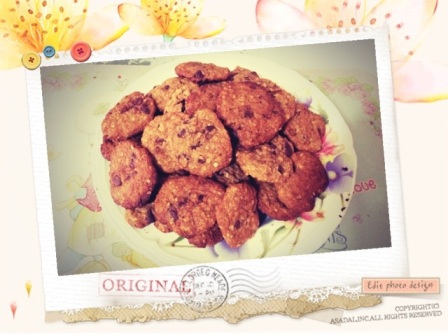 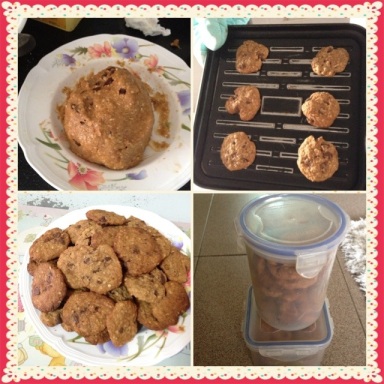 “Success is not final, failure is not fatal: it is the courage to continue that counts.”

Merry christmas everyone! The reason why I love christmas so much is because christmas is the season to give. And there are always reasons or things around me that make me feel so heartwarming. Not that I don’t feel it … END_OF_DOCUMENT_TOKEN_TO_BE_REPLACED

Love to update my blog with pictures now 🙂 Especially when I can put up pictures that summarise my whole blog post.

“Love is like the wind, you can’t see it but you can feel it.”
― Nicholas Sparks, A Walk To Remember

I think I have never used my phone in a train to write a blogpost and this will be my first try. Hopefully it will be good , hahhaa. 😉 alright. Actually it’s pretty true right?

Thinking about each and everyone of your lives, there is always up and down in our lives. We tend to complain about things that are bad in our lives, like, “why is my life so bad?” ,”why are things not going well for me?” And these setbacks tend to bring people down or even push them to the negative side. However, if life was like a straight line ——————————————, isn’t it boring?

Even our heartbeats have up and down. Then, Why will we expect our lives to be as boring as a straight line? Never be afraid of challenges in life, those are the one who allow you to learn and grow. And these can allow one to become a better person in life. Have a good day everyone !
Quote for today: “Only those who dare to fail greatly can ever achieve greatly.” -Robert F. Kennedy 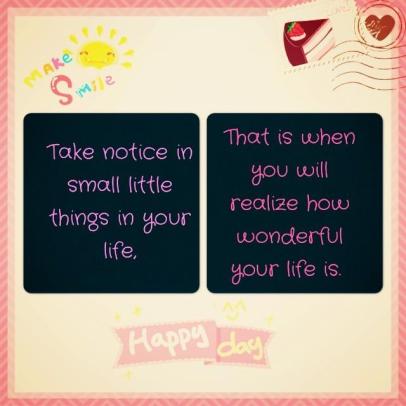 Take notice in small little things in your life.

Many things in our lives, are being taken for granted.
However, if you just take a notice of the little things or actions in your lives,
you will notice the difference and find meanings in your lives.

Today morning, a dear friend greeted me with this picture:

Even this small little detail, or picture can brighten up my day. 🙂

Some people might think that it is just a picture but if you look at it in a different way,

you will find the happiness that you never find before.

Thus, always be appreciative of what you have.

“Be thankful for what you have; you’ll end up having more. If you concentrate on what you don’t have, you will never, ever have enough”
― Oprah Winfrey

I’ve decided to be happy.

I’ve decided to be happy because there are only benefits 🙂
And do you have idea why?

Imagine you are angry with someone for doing something wrong, but that anger comes in you and not the other party, who is at the loss? You. Because you feel the anger but they don’t feel anything.

Not only that, it has been proven that laughter is the best medicine!!
Laughter can help improve one’s health.
And laughter is infectious, it can increase happiness in everyone. :))

Also, if you have a choice to live a day either with happiness or sadness,
which one will you choose?

I’ve decided to live with happiness because there are only benefits. 😉
Hopefully, so do you.

“Don’t cry because it’s over, smile because it happened.”
― Dr Seus